When I can say that my work day started with a cup of coffee? I’m pretty happy.

When I can say that my work day started with a cup of coffee, three giant dogs around, weather in the 70’s, doing some hair, getting to pick gorgeous shoes to go with gorgeous outfits, having an epic shoot and it all ends staring at honest Abe while a plane flies overhead?

Um. That can just be my new bar for a solidly good work day.

Okay, the only minor detail I would change would be my eye not swelling almost shut that morning thanks to some random allergy, that I can’t place on anything. I was simply thankful it was my left eye since I shoot out of my right. *(Think Will Smith in the movie Hitch, but dial it back a realistic notch.) Also thankful that this bride to be’s sister lives close by and had some claritin. Crisis averted.

Another crisis we averted? Jennifer’s hair stylist was on the way to a different state instead of on the way to her house. I don’t believe any hair emergency can’t be solved. So much so I made an entire YouTube channel out of giving little hair tips and tricks to help solve hair problems. So I told her to turn that iron on and we’d have her hair done in no time.

Now- I actually did not fly into Maryland thinking I would get to do an engagement session around the monuments of DC. But Kelly made the “mistake” of mentioning that it was all within driving distance and that Jennifer had mentioned going there- or maybe she was just saying they should go up there sometime? I’m not sure because as soon as I heard that DC was a drive away?

I let them know that it was now my mission for the weekend.

What I love to do with couples is ask things that are important to them as I’m getting to know them. What hobbies they might have. What their down time looks like.

When I get to fly into someone’s hometown and stay with them? I get to see first hand how they are together and what a piece of their daily life looks like.

If I could build a dream home, it would look a whole lot like Jennifer and Kelly’s Maryland home. They make me want to use the phrases like #BackyardGoals, #LivingRoomGoals and #SecuritySystemGoals. Okay, I don’t think that last one is a thing… but it only makes sense that two police officers choosing to spend their lives together would have nothing but the best ways to guard their own roof.

These two were down for anything. Which those of you following along know- an adventurous atmosphere for shooting is my favorite.

I asked them to see if they knew of any parks or natural spots they wanted to hit up before going to DC, then I realized that walking out either their front or back doors was a nature spot. I love incorporating pups into engagement & family sessions, and especially weddings– so it made it easy to have great backdrops without needing to leave the house with two Dobermans and a German Shepherd.

This future hubs came up with a little list of “maybes” for stopping by to shoot at while in DC, and I am so happy I did not interfere with trying to look up locations!

Look at the National Cathedral.

Then back up here.

We had two of Jennifer’s siblings along for the trip- which usually to me is a no-no. Typically bringing people on any shoot just gets in the way. (refer to my rants in this blog article) Thankfully I already knew Jennifer’s family thanks to shooting her other brother’s engagement (see the Jacob’s Well and 360 Bridge photos here) and wedding (it was a two day wedding, that blog might take longer!) so I knew it wouldn’t be an issue.

We pulled into the National Cathedral and I had them set a 20 minute timer. When I am in an environment where I know I will have multiple backdrops I want to use- I have to restrict myself. Of course, I added 5 more minutes… but hey- the place looked like Hogwarts.

We shot at a park for golden hour- where literally everyone was smoking marijuana- so it wasn’t too surprising when a guy walked into the shot I was snapping and wouldn’t walk out until I took a photo with him and his Dorito bag. *(scroll all the way down for actual shot.)

We made time for some delicious food somewhere in there, Jennifer’s sister got confused for Audrey Hepburn, and we headed right back out to catch the sunsetting over the Washington Monument. (typical Saturday, right?)

Since the monument is under construction (and will be shut down until 2019)- we were literally the only people on that one side of the hill. Most of it was blocked off- but there were no signs saying not to go up on the grass… soooo we all know I’m going to take advantage of not being told no.

Plus, I was with two police officers. I legit asked the law first.

Both her siblings helped in huge amounts by holding things like my Speedlite with my MagMod gear or keeping an eye on my saddlebag to be sure no one snagged it. By the time we made it to the reflection pool, it was dark (my favorite!) and the gnats were out with vengeance.

Yes. You read that right. On this epic, beautiful, miracle trip- there were gnats.

But as I knew from one other time shooting out in a cotton field for a wedding– bugs at night can be a blessing. Most people see them as rain or stars in photos, and that is plenty fine by me. The fun thing with a great couple? They stood like statues while we shone a light in their face for focus and only broke once. Which of course is one of my favorite outtakes!

I hope you love seeing this trip as much as I had fun shooting it. Please share away, go look at my tips for not washing your hair, and stay tuned for their wedding NEXT MONTH!

*Oh, and photographers! I try to sneak info for you guys too… look in between a couple of the photos to see my mindset behind how I choose different looks for an exact same location. 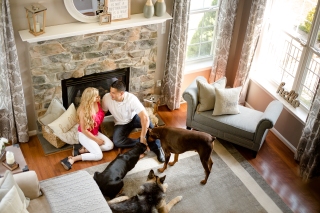 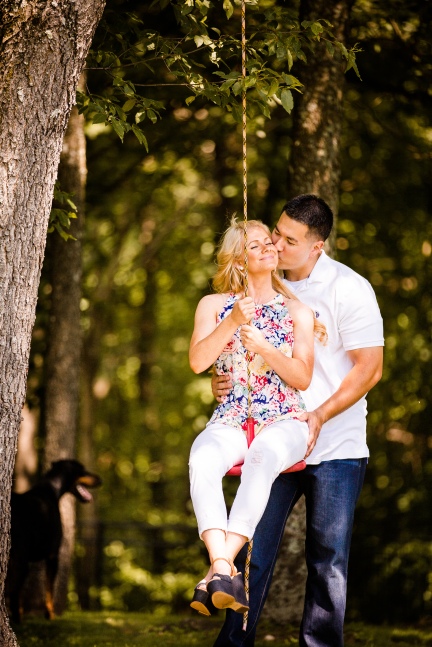 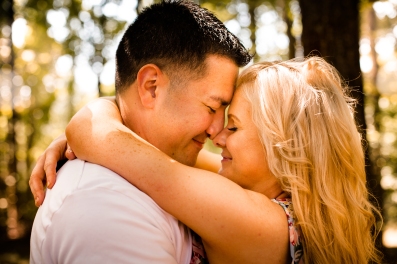 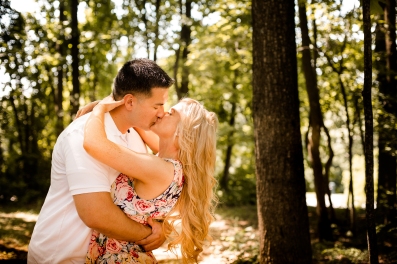 National Cathedral shot in broad daylight: Top right- exposed to see them nice and bright, using a wide angle. I got the photo on the left by bringing my ISO all the way down (ISO 100 1/1600sec and F2.8) and brought the shadows up in post. Be careful- not all images will look great by selective lightening. The bottom right was taken from the same spot, but throwing on my 50mm. 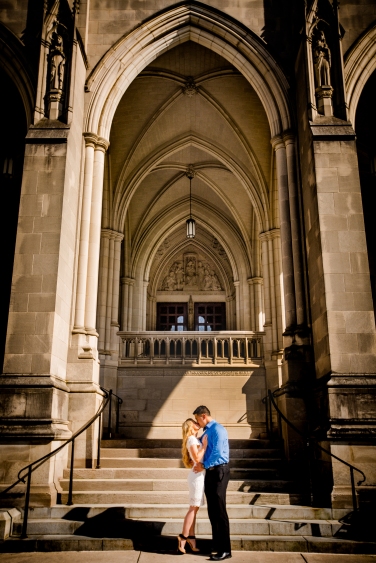 Probably my favorite example of why I shoot light & dark in a situation where I am pressing myself for time. I don’t want to spend an hour during their session seeing whether I like it one way or another. I saw the dark image in my head with how the sun was cutting through the cathedral, but also loved all the architecture in the background. These are two separate images, not a before and after. They are both lightly edited, but the left photo was shot darker, the right photo was shot brighter *(which meant I had to bring down the highlights in her dress afterwards). 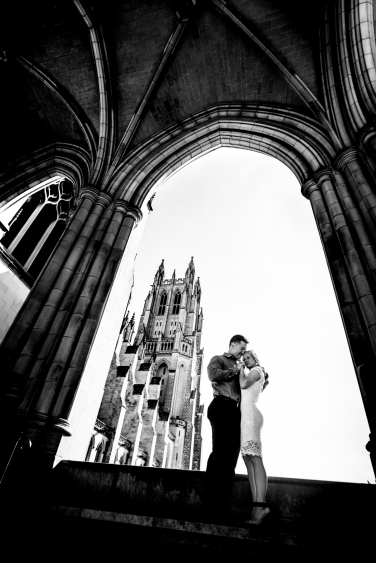 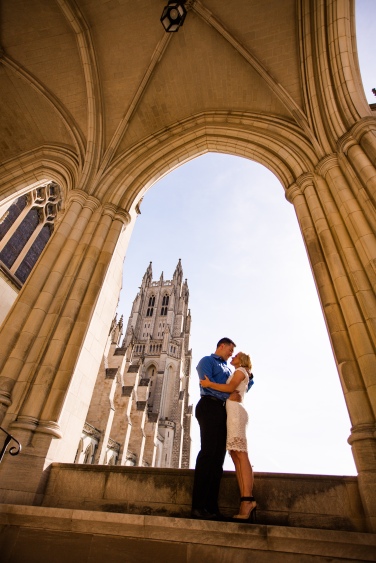 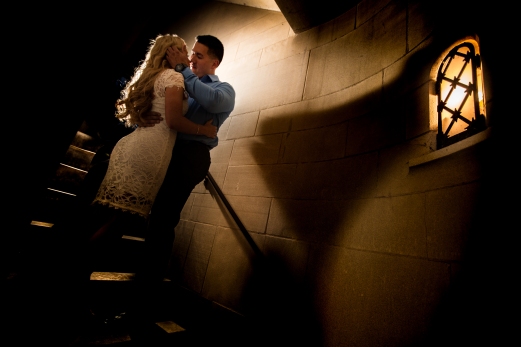 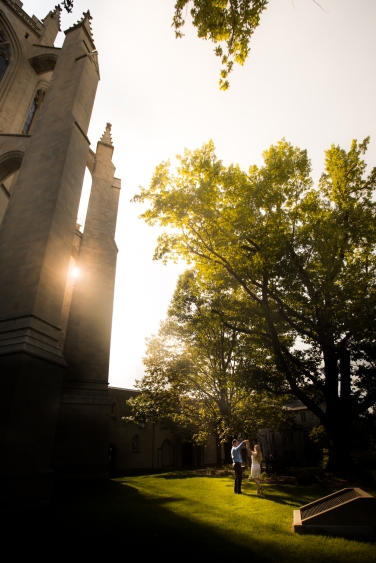 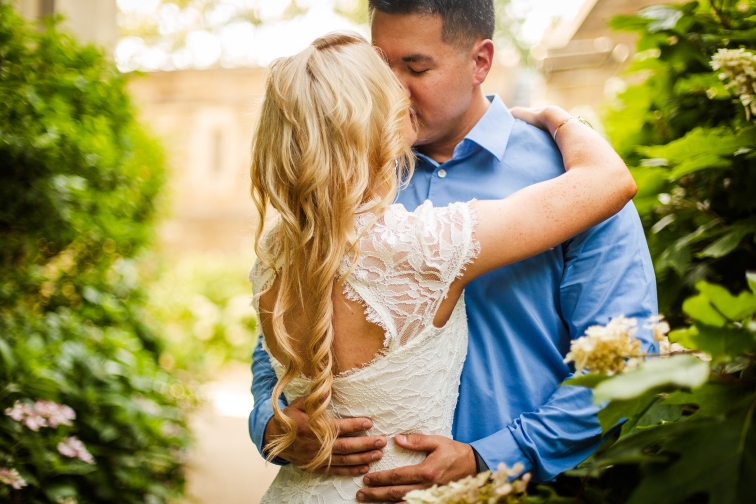 *In that 5 minute extension- we used the back of the castle… I mean cathedral as you see above. The sun shone through at just the right spot, and I could only catch it in my lens the way I wanted if they were in a specific spot. Luckily they are great at following directions to a tee! 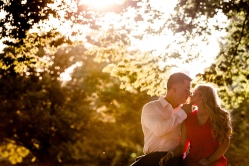 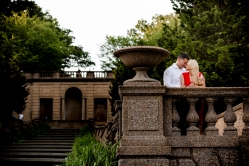 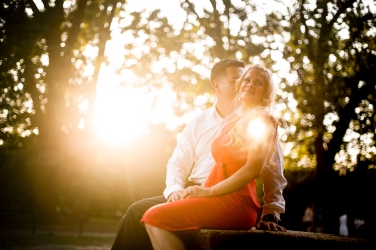 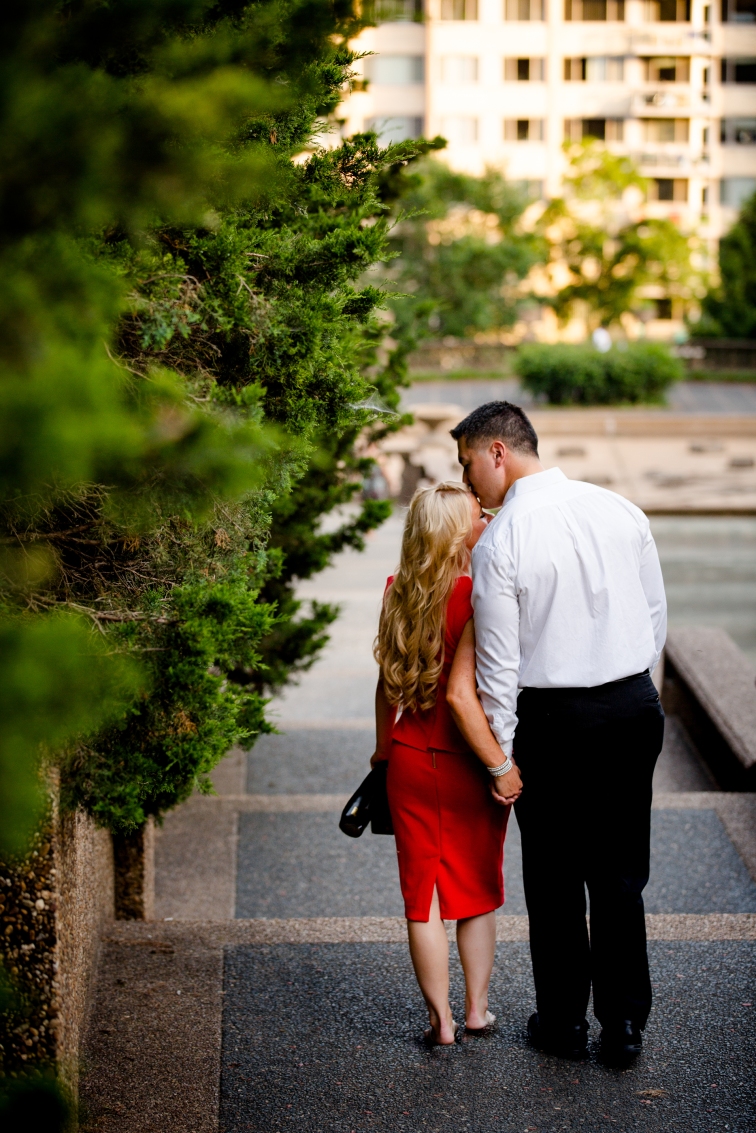 *there is typically water running through this park- but I am so glad we made the pitstop anyway. 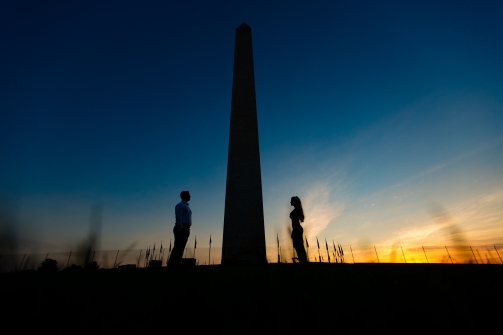 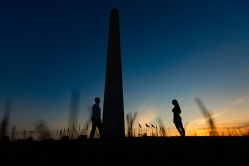 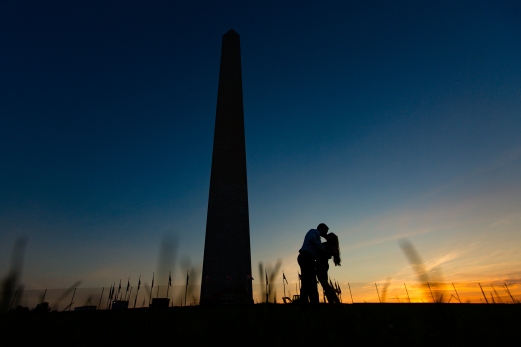 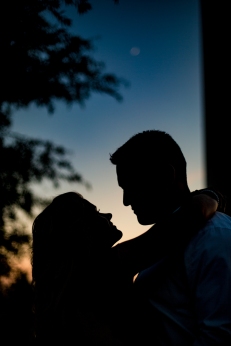 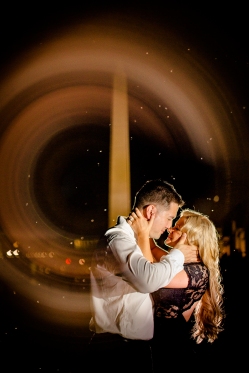 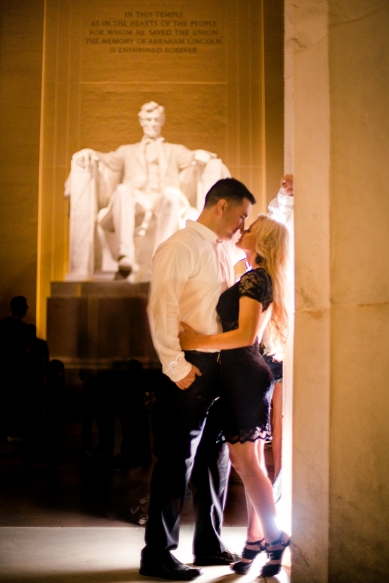 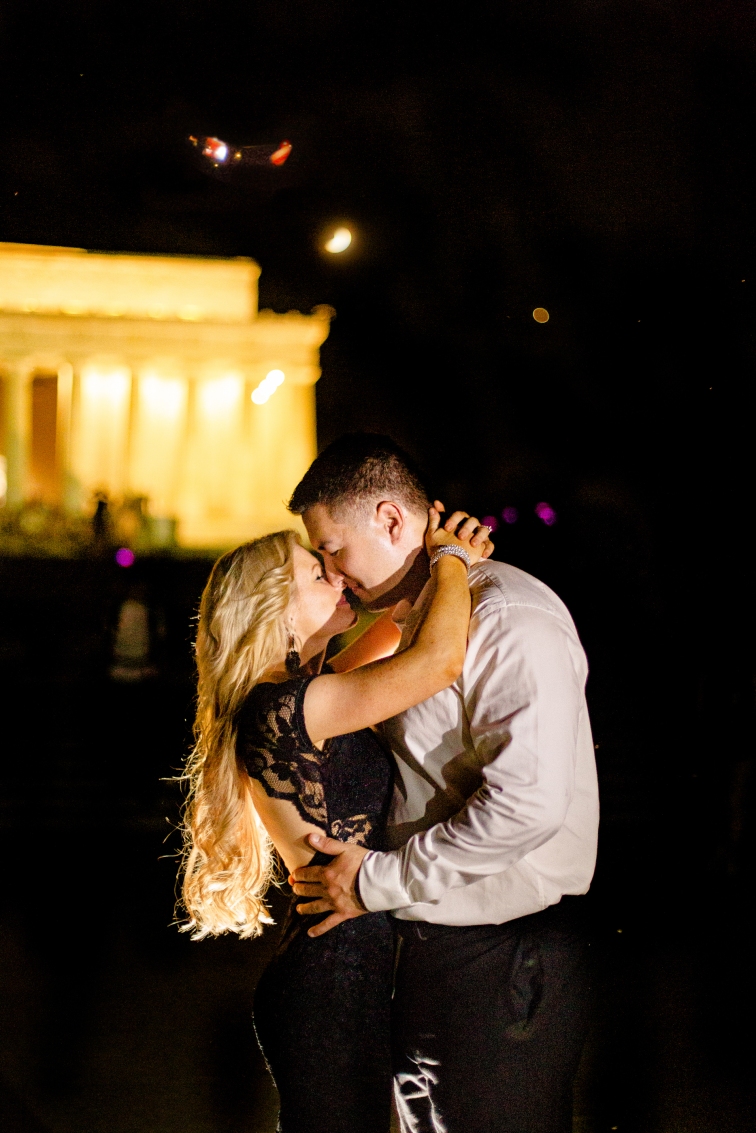 *few things: All those similar photos were turned into my first GIF! And the blurs in the grass that they are sitting down? Those are the fireflies/lightening bugs that I could hardly capture but they sat still for me to do a slow shutter shot anyway! I love that we know what the light blurs are. And okay, I know you can also hardly see the plane in that last one… but I am so proud at how fast these two whipped around and pulled off that pose like they were professional models for me to try to get it!

Now for the two favorite outtakes 😉 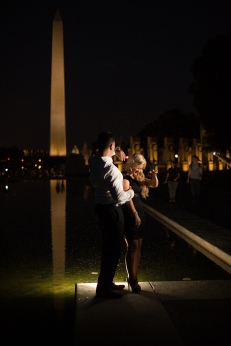